Despite its economic problems, Spain has much to admire 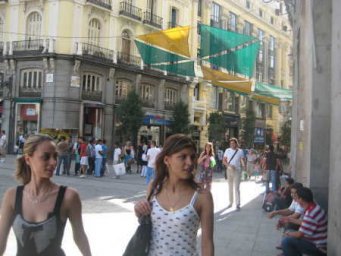 Thanks in part to a healthy Mediterranean diet, Spaniards live longer and have lower obesity rates than Americans, an observable fact as here on a street in Madrid.

Spain is having a rough time these days. The jobless rate, 17.9 percent, is Europe's highest. Real estate agents are running foreclosure tours along the grossly overdeveloped Costa del Sol. ETA, the Basque separatist group, is back to its bombings.

But, hey, Spain is still a pretty swell country.

After spending a good part of the last 13 years in places hardly synonymous with «fun vacation'' (Iraq, Gaza, etc.), I decided to celebrate a milestone birthday in this land of flamenco, Picasso and enough sangria to flood Madrid. Over 10 days, my husband and I rambled along Barcelona's famed Las Ramblas, toured some of the world's finest art museums and observed many things the Spanish do right even if their days as a major world power are long since gone:

Cars. They're small. Most Spaniards drive cute little vehicles like the Ford Focus, Honda Civic and the Spanish-made SEAT León.

One reason, of course, is the price of fuel. To fill our rented Leon cost nearly $80. And many side streets in ancient towns like Granada are so narrow you can stand in the middle and almost touch the walls on either side.

But Spain also has a fine network of multilaned autovias, plenty wide enough to accommodate huge SUVs. Fortunately, Spaniards haven't succumbed to that American obsession. And unlike many U.S. motorists, they don't hog the left lane — once they pass, they move to the right and let faster vehicles go by.

In general, we found Spanish drivers to be courteous and law abiding. They stop at red lights and marked crossings, with the result that Spanish cities are pedestrian friendly.

I couldn't help but compare Madrid and Barcelona with a big Mideast city, Beirut. Every time I took a walk there, I feared it might be my last: The shortage of traffic signals and abundance of aggressive drivers make crossing the street a game of Russian roulette. Not so in Spain.

High speed trains.Gotta love them. Several major Spanish cities are now connected by clean, sleek trains that zip along at almost 200 mph. You can get from Barcelona to Madrid — a distance of 386 miles, about equal to that from Tampa to Savannah, Ga. — in just over 2 1/2 hours.

Except for the two days when we rented a car, we traveled by train. And the rail network is complemented by excellent public transportation in the big cities.

We kept wondering: Why can't the United States do a better job of reducing its dependence on the car?

Diet. Summer in Spain can be searingly hot, so it wasn't surprising to see a lot of terrifically good-looking Spanish men and women baring a lot of tanned flesh. The vast majority were also trim. Spain's obesity rate is about 15 percent compared with 34 percent in the United States.

(It seemed that most of the pudgy people we encountered had American accents.)

On average, Spaniards also live two years longer than Americans, thanks in part to a Mediterranean diet rich in fruits, vegetables, oily fish and nuts. The diet reduces the risk of heart attacks and, possibly, Alzheimer's disease.

And as the United States wrestles with health care reform, it's worth noting that Spain, like most other developed countries, has a single-payer system with universal coverage.

We found much else to admire. Recycling bins are everywhere, contributing to clean city streets. With its sunny climate and breezy mountaintops, Spain is a leader in solar and wind energy. And though tourism has dropped, Spain remains a top vacation destination, for reasons that have a lot to do with the Spanish themselves.

While we were lunching at an outdoor cafe in Granada, a man selling CDs kept trying to talk to us. Annoyed, we tried to shoo him off as my husband paid the bill.

Finally, we realized he was pointing at something. It was my wallet, which had fallen under the table. Had he not been so persistent, I would have walked off, leaving behind all my money and credit cards.

«De nada,'' he said. And smiled a warm Spanish smile.

Susan Taylor Martin can be reached at susan@sptimes.com

Spain, live, spaniards, spanish
—
Spain
RSS
No comments yet. Be the first to add a comment!
Log in or Register to write comments