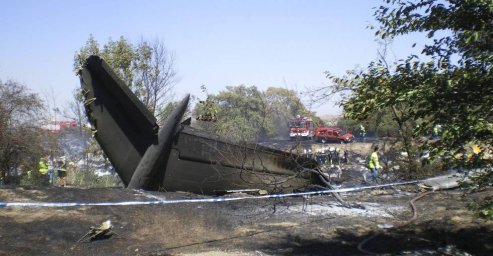 Grieving relatives on Thursday tried to identify charred bodies from the wreckage of a Spanish jet which crashed at Madrid airport on its second attempt at takeoff after mechanical problems.

Airline officials declined to comment on possible causes for Wednesday's crash in which 153 people were killed, but said Spanair Flight JK5022 had earlier been delayed due to a problem with the air intake heating system before it attempted a second takeoff for its flight to Las Palmas in the Canary Islands.

«They supposedly fixed the problem which the pilot later said was with the air conditioning and then we took off,» survivor Ligia Palomino told Ser radio.

«The plane was wobbling from one side to another. Then I began to suspect we would crash. I don't know what happened next. I was in a sort of river and saw people, smoke, explosions — which I think woke me up.»

Rescue workers said the only passengers to survive Spain's worst aviation disaster since 1983 were those who fell into a stream and avoided severe burns.

The government said only 19 people of the 166 passengers and six crew aboard survived the MD-82 jet crash. The airline listed 157 passengers and 10 unnamed crew. A Spanair spokesman could not account for the discrepancy in numbers.

Firefighter Francisco Martinez told Reuters that a wheel on his fire engine had caught fire in the extreme heat given off by the plane's wreckage as he tried to rescue survivors.

Relatives gathered at an improvised morgue in a convention centre to identify the bodies, many of which were badly burned.

«Those responsible say that it will take two days at the most to finish identifying people by their fingerprints. DNA identification will take a bit more,» Alvarez told SER radio.

A passenger list published by Spanair, owned by Scandinavian Airlines Systems (SAS), showed mostly Spanish names but the government said there were 11 nationalities on board including people from Sweden, Germany, the Netherlands and Chile.

Many were children, rescue officials said.

In Beijing, Spanish sailors Fernando Echavarri and Anton Paz wore black armbands when receiving gold medals in the Olympic Games on Thursday, after officials turned down a request to allow the Spanish flag to fly at half-mast.

Spanair chief executive Marcus Hedblom said he had no plans to ground his MD-82 fleet.

crash, victims, Spanair
—
Spain
RSS
No comments yet. Be the first to add a comment!
Log in or Register to write comments