The Russian Cossacks arrive in Madrid 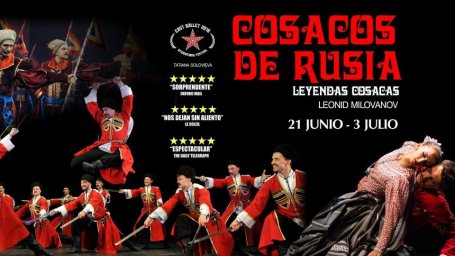 During the summer months the Spanish capital hosts the East Ballet 2016 festival with performances by Kiev Modern Ballet, St. Petersburg Ballet and the Cossacks of Russia.

As it is a tradition this year thanks to the efforts of Tatiana Solovieva, who in her time worked with the legendary dancers Maya Plisétskaya, the inhabitants of Madrid will be able to enjoy the authentic Russian ballet. This time the businesswoman has decided to surprise the Spanish public by organizing the East Ballet 2016 festival to be held during the months of June, July and August at the Philips Gran Vía Theater of Light. Apart from the St. Petersburg Ballet this year there will be performances by The Cossacks of Russia, who had already visited the Spanish capital, and the Kiev Modern Ballet for the first time.

The Great Cossack Ballet was founded in 1991 when the Cossack traditions repressed during the Soviet era began to be restored in Russia. Formed by 70 artists, it is the only dance company that represented Russia at the 60th Anniversary Gala of the Queen of Great Britain in May 2013. Two years earlier, in 2011, the Cossacks of Russia performed in Madrid, At the foot of the Royal Palace where they also had a very good reception.

Being a warlike people the Cossacks the most important values for them were «god and tsar», reason why they were persecuted after the triumph of the Bolshevik revolution. Their dances count on many military elements, and whips, sabers, spears, cannons, etc. are used. The songs of the Cossacks are popular songs about love, tragedies, war and also goodbyes, because they are going to fight and do not know if they will return. All this can be seen from June 21 to July 3 at the Teatro de la Luz Philips Gran Vía translated into Spanish thanks to audiovisual projections.

As for two other companies, Kiev Modern Ballet and St. Petersburg Ballet are all a benchmark in the world of Russian ballet. Kiev Modern Ballet founded by Radu Poklitary was honored to participate in the opening and closing ceremonies of the Olympics in Sochi in 2014. The company will present in Madrid «The Nutcracker» (from June 7 to 12) and «The Lake of the Swans „(from 14 to 19 June).

While Ballet of St. Petersburg, the company of Andréi Batalov comes to Spain for the third time so it is already known among the Madrid public and has the best dancers, Radamaria Duminica Nazarenko and Nikolá Nazarkevich. The company will present the Swan Lake (from July 5 to 17 and from July 26 to August 6) and La Bella durmiente (from 19 to 24 July).

cossacks, Madrid, ballet
—
Spain
RSS
No comments yet. Be the first to add a comment!
Log in or Register to write comments