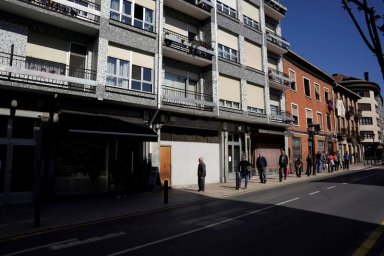 Spain became the second in Europe in the number of coronavirus infections, ahead of France and Germany. With a new jump in cases of the disease by 40% compared with the previous 24 hours, this Thursday the threshold of 3,000 infections was exceeded. The number of deaths increased to 84.

In Spain there are autonomous communities in which the coronavirus spreads uncontrollably, in others the incidence is negligible. At the same time, health authorities claimed that in each place certain measures should be taken depending on how the epidemic develops.
However, the head of government Pedro Sanchez on the eve extended to the entire territory of Spain measures that were applied only in the most affected areas: Madrid, Alavi and the province of La Rioja.
In Spain, a record jump in infections, the number of deaths doubled. Over the past 24 hours, Spain has recorded more than 2 thousand new infections with coronavirus and one and a half hundred deaths. This was reported by the country's Ministry of Health.
According to the ministry, as of Sunday, 7753 people are infected. On Saturday, the number of infected exceeded 5700.
The number of deaths doubled and on Sunday amounted to 288, while on Saturday there were 136 dead.
Spain is the second most virus-affected European country after Italy.
On Saturday, Spain, following Italy, decided to quarantine the whole country. The government has ordered 47 million citizens to stay home and leave home only to work, to hospitals, or in connection with other urgent needs.
The streets in Madrid and Barcelona are deserted on Sunday. Buses in Madrid run without passengers. Bars, restaurants and shops that do not sell essentials, closed.
Prime Minister Pedro Sanchez said emergency measures would have a serious impact on citizens and businesses, but promised that the government would work to reduce this blow. His wife Begona Gomez showed a positive test for coronavirus.
coronavirus
—
Spain
RSS
No comments yet. Be the first to add a comment!
Log in or Register to write comments