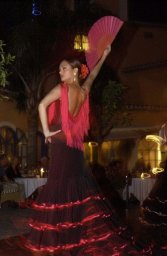 Flamenco is more than a unique style of music. It is also dancing and singing and a way of understanding art.

Flamenco was formed under the influence of very diverse backgrounds. We can find in this music contributions Hindu, Arab, Jewish, Greek, Castilian etc… Its long and interesting history is full of legends, misunderstandings and unresolved questions. But the truth is that the Roma were the first and the best interpreters of this music.

The Gypsies of southern Spain created this music day after day since coming to Andalusia in the fifteenth century. It is believed they came from a region in northern India called Sid which now belongs to Pakistan. The Gypsies had to abandon these territories due to a series of conflicts with foreign conquerors. Sid tribes moved to Egypt, where they remained until they were expelled.

His next destination was the territory of today's Slovakia, but then, as were many, decided to split into three groups. So they were established the three main centers of the continent Gypsies. The first consisted of Russia, Hungary, Romania and Poland, the second, the Balkans and Italy, and the last, France and Spain.

On his journey through the world of gypsy culture he has taken and has endorsed the expressions of other cultures. So did Andalusian music. With nearly eight hundred years of mixture of various cultures, Andalusia enjoyed an impressive cultural boom. There Gypsies found the perfect place to develop their musicality.

But his life in Spain was not very happy. From the Catholic Kings he is trying to take the country to anyone who was not Spanish properly. And the Gypsies, who spoke their language and had their nomadic ways, were considered as marginal people. Many worked and died in the mines and lived in houses built in caves and mountains. Most Roma as parties had to be held in secret. Sometimes the gypsies were invited to play their music at parties of the rich. At these meetings, they are interpreting songs about the injustices committed against them by the same people who listened tes without understanding the meaning of the letter.

No wonder, then, that pain, sadness, loneliness are the most frequent topics of flamenco. And they are so profound that the singer often goes to cry to express them. The famous «cante hondo», popular song, is understood as «sing so deep it reaches the end of suffering.»

For the Roma, music has always been a very important part of your daily life. All they need to start making music is a voice and some rhythm, which can be added with feet and hands. Therefore, in the most primitive forms of flamenco merely instruments that the human body itself are needed.

At the same time the gypsy music has always been a friend of the ornaments, improvisation and virtuosity. It is something that arises spontaneously in the soul to become a marvel of interpretation. It began with a voice and some palms. With the introduction of the Spanish guitar, the interpretation became more intimate and more difficult technically. In this century the use of! drawer (percussion) and transverse flute has been almost constant. Today Flamenco sets are more complex than the same symphony orchestra.

In some classical music composers they sought inspiration in flamenco melodies. And flamenco, meanwhile, sometimes using classical and familiar topics. In short, the world of flamenco stops not evolve from its origins to now.

flamenco, gypsy
—
Spain
RSS
No comments yet. Be the first to add a comment!
Log in or Register to write comments